To celebrate the release of MONOPOLY Live at the Live Casino , Roxypalace Casino is  giving you the chance to win a share of £25,000 in Cash when you play .

You’ll earn one point for each £10 you wager – except on MONOPOLY Live, where you’ll earn five points for every £10 .

Make it all the way up to Mayfair on our leaderboard and receive a £2,000 Cash Prize, plus a Weekend stay in a London Mayfair Hotel for two .

Here’s how to compete and win : 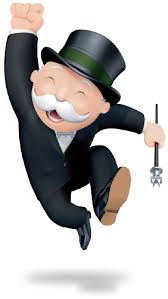 This amazing new game brings you all of the thrills of the live casino game Dream Catcher with the much-loved format of MONOPOLY.

However the real highlight is when the Bonus game transforms play into a thrilling 3D bonus sequence, where MR. MONOPOLY travels around the board collecting Cash Prizes for qualifying players.

MONOPOLY Live is a unique live online variant of the hugely popular MONOPOLY board game. The aim of the main game is simple: A live game host spins the super-sized, vertically mounted wheel and players predict the segment the wheel is going to stop at after the spin, while the virtual MR. MONOPOLY sits alongside ready to spring into action.

As well as offering the chance to bet on the wheel stopping on a certain number, the wheel incorporates ‘CHANCE’ segments for instant cash wins and multipliers, and also ‘2 ROLLS’ and ‘4 ROLLS’ segments. These latter segments activate a captivating, augmented reality, 3D Bonus game built around the adventures of MR. MONOPOLY.

Opt in to this promotion  »

Keep an eye on your progress and  the leaderboard  here »

Created in partnership with Hasbro and available only from Evolution gaming , MONOPOLY Live is a unique live online game show based on the world’s best-loved board game .

When the Bonus game is activated, qualifying players join MR. MONOPOLY as he enters his augmented reality 3D MONOPOLY world and steps around the 3D MONOPOLY board collecting prizes, multipliers and more.

The walk is determined by a pair of dice. Players qualify for the Bonus game by placing bets on ‘2 ROLLS’ and ‘4 ROLLS’ in the money wheel game. If players have not placed either of these bets, they will still be able to watch and enjoy the Bonus game, but they cannot win any prizes in it.

All the familiar MONOPOLY board elements are here from GO, Chance and Community Chest, houses and hotels as well as Jail and Super Tax.

The MONOPOLY board is available in  English, German and Italian language variants.

Play more Monopoly games and slots  on these Casinos :